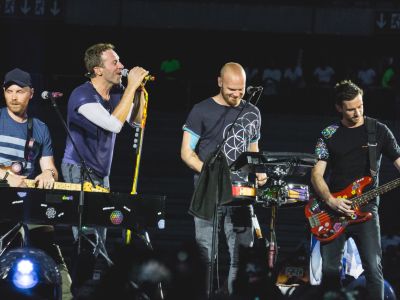 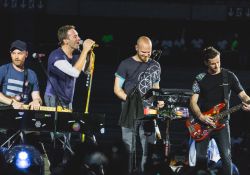 The dates for Coldplay concerts on the 2023 world tour:

"I call it magic." It can hardly be expressed more aptly. The mega-band Coldplay around frontman Chris Martin, with an unchanged line-up since 1996, has become one of the biggest pop-rock bands in the world. Their concerts, which are always sold out, border on magic. Who has experienced it live, knows what we are talking about. A colorful and cheerful show, in which fans and the band alike have fun - goosebumps are pre-programmed! Get Coldplay tickets now and experience one of the world's most successful bands live in 2023.

Chris Martin, Jonny Buckland, Will Champion and Guy Berryman met in 1996 at London University College and from then on were to write music history. Their big breakthrough came in 2000 with their debut album "Parachutes". All of the eight subsequent studio albums landed at No. 1 in the album charts in numerous countries and some were awarded multi-platinum. In October 2021 Coldplay released their ninth studio album "Music of the Spheres". With the track "Higher Power" and the single "My Universe", which was created in cooperation with BTS, Coldplay delivered two hits that were listed on all radio stations for weeks. With a total of over 110 million records sold worldwide, Coldplay is one of the most successful bands of the 21st century. On the streaming service Spotify, Coldplay reach over six million listeners a month, with their most successful single to date, "Something Just Like This," alone registering an incredible 1.7 billion streams there. During their musical career, the British band has already been awarded various prizes, including seven Grammys alone.