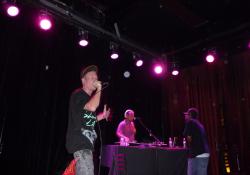 Macklemore is coming on tour through Europe in 2023! Five dates are scheduled as part of "The Ben" tour in Germany. In Cologne, Berlin, Munich, Offenbach and Hamburg, the US rapper will be a guest in the spring of 2023. On the upcoming tour, Ben Haggerty aka Macklemore will then also present his new album, which will be released next year. With "Chant", which was created in collaboration with the Australian singer-songwriter Tones and I, and "Maniac" Macklemore already provided a taste of the new record.

In addition to Germany, Macklemore 2023 has shows scheduled in the UK, Belgium, France, the Netherlands, Poland, Austria, Switzerland, Italy, Denmark and Norway. Secure your Macklemore tickets now at ticketbande and experience the rap talent live on stage in 2023!

The multiple Grammy award-winning US rapper from Seattle achieved his worldwide breakthrough in 2012 together with his partner Ryan Lewis. His first solo album "Gemini", released in 2017, promoted Macklemore to No. 2 on the Billboard Top 200 and was certified platinum. The Seattle artist is known for socially critical lyrics. Thus, the song "Same Love" from the album "The Heist" addresses homosexuality and same-sex marriage. But drug use also plays a major role in his songs, as Macklemore lost six friends to an overdose. in "gemini", the rapper received support from many celebrity guests, including Kesha, Reignwolf and Skylar Grey. In 2023, fans can finally look forward to a new Macklemore album.