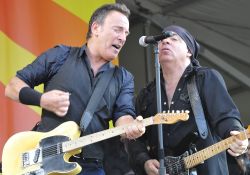 Bruce Springsteen Tickets for the Bruce Springsteen & E Street Band Live Tour!
The Boss will finally play concerts in Europe again! After "The River" tour in 2017, the Boss is back on the European stage with a massive stadium tour 2023.
In 2020, the singer released his 20th studio album, "Letter To You". Bruce Springsteen will certainly present the new tracks on his upcoming tour. But classics such as "Dancing in the Dark", "Born in the USA", "The River", "Streets of Philadelphia" or "Darkness on the Edge of Town" will not be missing from the concerts.

The advance sale has not started yet. You can already register bindingly at ticketbande. The provider will get you the tickets in your name after the presale has started.
Register now at ticketbande for Bruce Springsteen tickets and experience one of the greatest rock musicians live on stage in 2023!

In his more than forty-year music career, Bruce Springsteen has recorded over 120 million records sold worldwide. Born in 1949 in New Jersey, the singer has already received an Oscar and a Tony Award, as well as an incredible twenty Grammy awards. When Bruce Springsteen received a record contract in his early 20s, he spontaneously put together a band from friends and acquaintances. Since 1974, the group known as "E Street Band" has been active, but the constellation of members has varied constantly over the years. In the 70s, Bruce Springsteen was nicknamed "The Boss" by his bandmates because he always paid them off in cash after a gig - the rock musician still bears the title today.
If Bruce Springsteen was already a local personality, he advanced to a celebrated star in the States with his third album "Born To Run" and tracks like "Thunderroad" and "Jungleland". Bruce Springsteen then entered the rock Olympus with his 1984 record "Born in the USA," which includes the hit of the same name as well as other classics such as "Dancing In The Dark," "Cover Me" and "Jungeland." Over the decades, Bruce Springsteen established himself as one of the most popular, successful and influential musicians of our time. Even after more than forty years, the Rock and Roll Hall of Fame member rocks the stages like no other and inspires young and old with his charismatic voice and peotic lyrics.
When Bruce Springsteen is not working on new music, he runs the Spotify podcast "Renegades: Born in the USA" with none other than Barack Obama.