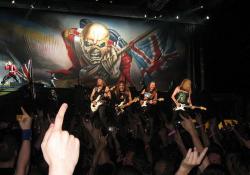 Iron Maiden are coming back on tour in 2023! Fans can look forwards to concerts in Krakow, Amsterdam, Antwerp, Glasgow, Dublin, Leeds, Nottingham, Manchester, Birmingham and London as Iron Maiden is coming back on tour.
No band has had such a lasting influence on heavy metal as Iron Maiden. Founded in 1975 by bassist Steve Harris, the band not only played a decisive role in shaping the heavy metal of the 1980s, but also served as a style-defining role model for subsequent bands of the most diverse metal subgenres. Many bands in the scene have re-released Iron Maiden songs as covers or sometimes play entire albums at their concerts. To date, the British band, whose name is based on a medieval instrument of torture, has produced 17 studio albums. Five of them reached number one in the UK charts, and another nine reached the top ten. Their success also extended beyond the island to other countries across the globe. With more than 100 million records sold, Iron Maiden is one of the most consistent and commercially successful metal bands in the world. Along with bands like Saxon, Angel Witch, Praying Mantis, Diamond Head, Tygers of Pan Tang and Dep Leppard, Iron Maiden is classified as part of the New Wave of British Heavy Metal (NWoBHM).
The founding period was not an easy one for Iron Maiden, as punk and new wave were much more in vogue than metal in the 80s. Nevertheless, the band got a record deal with EMI and in 1979 even the opportunity to perform on "Top of the Pops" on BBC. Iron Maiden reached a larger audience this way and the debut album "Iron Maiden", which was released shortly afterwards, climbed to number four in the charts. While the band initially played as the opening act for Kiss and Judas Priest, they soon filled large halls in Europe and later in the USA. With the album "Killers", released in 1981, Iron Maiden went on its first world tour. The group's big breakthrough, however, came in 1982 with the album "Number Of The Beast", which went straight to the top of the charts. Iron Maiden then embarked on a 180-gig tour around the globe. While the following albums "Piece Of Mind" in 1983 and "Powerslave" in 1984 still musically followed their predecessors, the band experimented with synthesiser guitars for the first time in "Somewhere in Time" from '86. 1988 saw the release of 'Seventh Son Of A Seventh Son', which established itself as the most critically acclaimed album after 'Number Of The Beast'. The single 'Bring Your Daughter ... To The Slaughter' from the 1990 album "No Prayer For The Dying" was then the band's first single to reach the top of the charts in the UK. The band has released further albums at regular intervals, most recently 'Senjutsu', released in September 2021.
Iron Maiden's time is marked by constant changes of band members. Steven Harris is the last remaining member of the original line-up with singer Paul Day, guitarists Dave Sullivan and Terry Rance, and Ron Matthews on drums. Today, besides Harris, Iron Maiden consists of Bruce Dickinson, Dave Murray, Adrian Smith, Janick Gers and Nicko McBrain. Since the early 80s, the band has been accompanied by the mascot Edward The Head, Eddie for short, who has graced countless covers of the band.