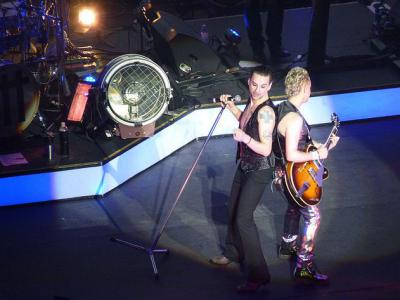 Memento Mori Tour 2023 - Depeche Mode - After the death of Andrew Fletcher, many fans thought that this was the end of the Depeche Mode era. But fortunately, the opposite turns out to be true: On 4 October, the Depeche Mode World Tour 2023 was announced at a press conference in Berlin.

Their last album 'Spirit' shot from 0 to No. 1 on the album charts and Depeche Mode tickets for the band's 'Global Spirit Tour' sold out in minutes. Many fans who went empty handed in the pre-sale were able to attend the fantastic shows through ticketbande.
The "Global Spirit Tour" consisted of a total of 130 concerts and the Depeche Mode tour finale was celebrated in Berlin. A recording of the two grandiose Depeche Mode Berlin concerts was released on the DVD "Spirits in the forest".
Depeche Mode is considered the most popular electronic band of all time and one of the pioneering bands for synth pop.
Depeche Mode now released the "Ultra - The 12" Singles" record, which also, unsurprisingly, did well in the German album charts. Depeche Mode also landed #5 in the charts with it.