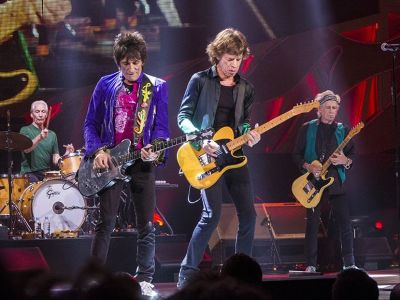 Are the Rolling Stones coming back on tour in 2022? The answer is YES!
In the summer of 2022, the Rolling Stones will go on tour again as part of their incredible 60th anniversary. In this country we can look forward to two concerts - in Munich and Gelsenkirchen.

The dates for the Rolling Stones concerts in 2022:

Secure your Rolling Stones tickets right now at ticketbande and experience the rock legends live on stage in 2022!

The most legendary band in the world Rolling Stones is known for spectacular live shows and even after more than six decades of band history really cares here Ü70 no one. As the personification of rock'n'roll Mick Jagger, Keith Richards and Ronnie Wood want to find out "how long you can do it". The Rolling Stones have regularly broken world records with their world tours, first in 1981, when two million visitors celebrated with the Stones on the biggest and most successful tour in the music industry to date. Mick Jagger, Keith Richards, Ron Wood and Charlie Watts broke this record themselves in 1994 with the Voodoo Lounge Tour. In 2022 we can look forward to an anniversary tour!

At the end of 1961, Keith Richards met his old school friend Mick Jagger again by chance at Dartford station, about thirty kilometers from London. It quickly became apparent that the two boys shared the same musical preferences. Jagger then invited Richards to his rehearsal room. A short time later, Jagger and Richard formed a new band together with guitarist Brian Jones bassist Dick Taylor, which was expanded by Tony Chapman on drums and Ian Stewart on keyboards. In 1962, the still-unnamed band played their first concert. When Brian Jones wanted to place an ad for a gig, he spontaneously decided on the phone for the band name Rollin' Stones - a reference to Muddy Waters' "Rollin' Stone".
With a record deal in their pocket, the Rolling Stones established themselves as an anti-Beatles band in the '60s. Not only with their appearance, but especially sound-wise, the Rolling Stones ushered in a new musical era. In 1965, the British rock band released "The Last Time," their first single of their own, after having always played cover versions before. The track reached the top of the charts and was immediately topped by the second single "Satisfaction," which became a number one hit worldwide. From then on, the Rolling Stones were the talk of the town: sold-out tours around the globe were joined by albums that achieved gold and platinum status. But over time, the darker side of success became increasingly apparent. Internal conflicts between band members, personal problems and vested interests defined the Rolling Stones' 70s and 80s. It wasn't until the mid-90s that the band found a solution that was satisfactory for all members: every five years, the Rolling Stones go on tour, if possible with a new album in their luggage. The Stones proved that the concept works most recently with their "No Filter" tour in 2017. Will the Rolling Stones remain true to their rhythm? Then we can look forward not only to a new world tour in 2022, but possibly also to a successor to "Blue & Lonesome" from 2016.